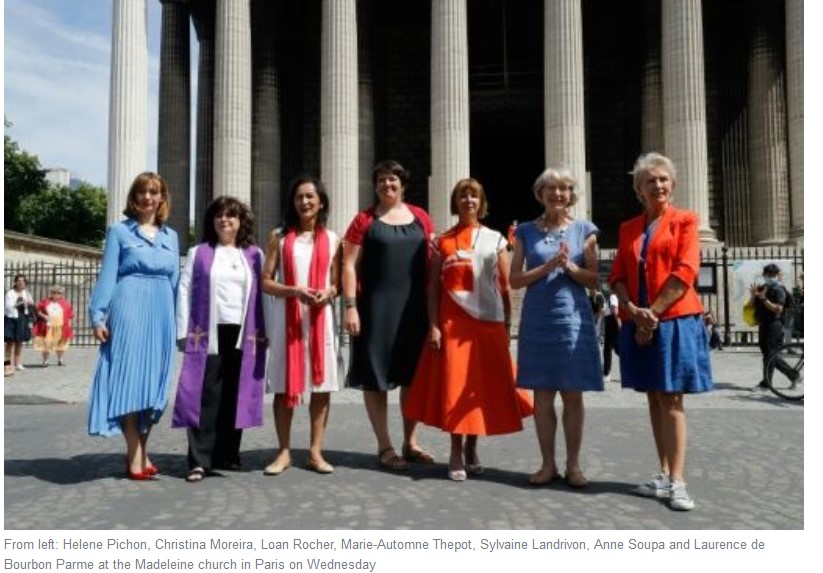 Seven women announced Wednesday that they would seek leadership roles in the French Catholic Church that are officially reserved for men, the latest push to give women a place in the Church hierarchy.

After submitting their candidacies for posts including deacon, priest and bishop to Pope Francis’s envoy to Paris, the women attended a mass at the Madeleine church to mark the feast of Saint Mary Magdalene.

Their campaign echoes a quest by Anne Soupa, a 73-year-old activist theologian, who in May declared herself a candidate to lead the archdiocese of Lyon.

That post has been vacant since Cardinal Philippe Barbarin stepped down last year over a paedophilia scandal involving one of his priests.

“The Church is experiencing a deep crisis, and we need to open up its doors,” Soupa, who accompanied the women to Paris, told AFP.

“Women are rendered invisible in the Catholic Church,” she said. “In this age of equality, when women’s abilities are recognised by all, we can’t continue like this.”

Scores of paedophilia and sexual abuse charges have rocked the Church worldwide in recent years, prompting calls for wholesale change from critics who say it has failed to adapt its traditions to the demands of the modern world.

Yet so far Pope Francis, who backs many progressive causes such as considering allowing priests to marry, has refused calls to give women a greater role — let alone let them be ordained.

Last year, he declined to move forward on letting women become deacons, which proponents say could help fill the gap in countries were priest numbers are dwindling, after several years of inconclusive debates.

“This isn’t a move against the Church, but for it,” Soupa said.